The cultural heritage of each country, region or city consists of local costumes, music, dance, architecture, art and traditional cuisine. Kraków, and the whole Małopolska (Lesser) region, is full of these. Nevertheless, you need to know what to eat and where to eat it. The best way to taste local culinary specialities is through street food.

Maczanka krakowska is an old Kraków dish consisting of aromatic pork loin or pork neck, caraway sauce and a roll. This straightforward and quick dish is the ancestor of today’s hamburger. The history of Maczanka krakowska is somewhat hazy. This sandwich was known as early as the 16th century and was supposedly the favourite snack of Kraków’s carriage drivers. Many sources also indicate that it was the dish of poor students due to the relatively low cost of its preparation. The best “maczanka krakowska” can be found at the Judah Street Food Market on St Wawrzyniec Street in Kraków’s Kazimierz district. It may seem that this Małopolska street food is modelled on the hamburger. This combination was supposed to convince the less affluent residents to Kraków: a bit of leftover pork neck, some leftover meat sauce and the cheapest roll.

At Plac Nowy (New Square) in Kraków’s Kazimierz district, there is the characteristic “Okrąglak” building, from which one of the favourite street food specialities of the inhabitants of Kraków and tourists is served - a crispy zapiekanka. This delicacy is made from a baguette (a French roll) cut lengthwise, or in the Kraków style, “weka”, to which mushrooms and grated cheese are added. The zapiekanka is topped with a sauce - traditionally ketchup, but you can also choose mayonnaise, garlic sauce or a very spicy sauce. It is also possible to add extras, such as ham, bacon, salami, cucumber or paprika, and the locals particularly recommend chives. 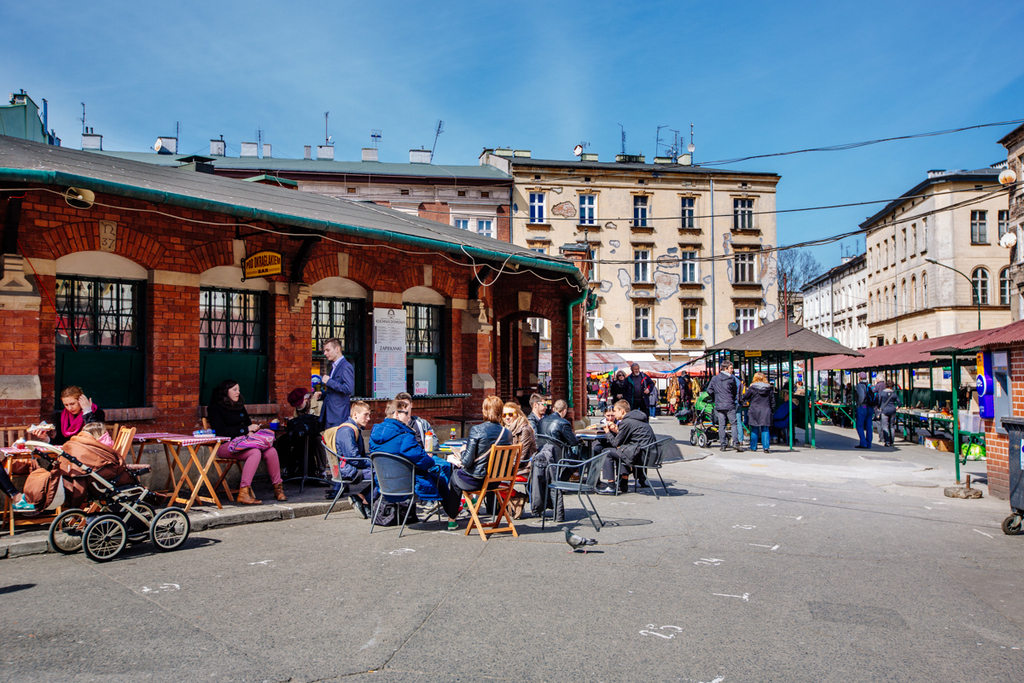 Kraków’s links with the Middle East can be seen all the time on the streets of Poland’s former capital. Kraków’s St Mary’s Trumpet Call and the baked potato “kumpir” show the link. The best baked potato in Kraków is served at Pan Kumpir at the Judah Street Food Market on St Wawrzyniec Street, in Kraków’s Kazimierz district. This calorific dish is made of mashed potato mixed with butter and well-melted, stretchy cheese. This baked potato can be stuffed to the brim with various ingredients: chicken, sour cream, cottage cheese, feta cheese, corn, cucumber, tomato, Chinese lettuce, radishes, chives, roasted onions, beetroot, olives, jalapeno peppers. The whole dish is, of course, served with sauce.

Sausage from a blue Nyska

The best sausages, especially kielbasa, bacon or ham, come from Poland. As a result, fried sausage - in a frying pan, on the grill or from the bonfire - is an inseparable part of Polish cuisine. Thus, it should come as no surprise that fried sausage from a blue Nyska on Grzegorzecka Street near Hala Targowa (Market Hall) has become a hit street food among Cracovians and tourists. It is a perfect example that sometimes the simplest solutions are the best. Sausage fried on the grill served with fried onions, mustard and a slice of bread. In addition, all this is from a blue Nyska - the cult delivery van from the era of the People’s Republic of Poland. If you are in Kraków, do not miss the chance to visit Hala Targowa and try a sausage from a blue Nyska.

Grilled oscypek with cranberry on the streets and in markets

We leave Kraków for a while but stay in the Małopolska region and go to Podhale. This mountainous region between the Tatra, Pieniny, Gorce and Beskid ranges is characterised by specific highland folklore. One of its elements is the cuisine, especially cheese made from sheep milk - oscypek. When visiting Zakopane and its surroundings, Nowy Targ, Szczawnica or other places in Podhale and its neighbourhood, it is worth trying grilled oscypek with cranberry in the bustling local markets or on the streets. Grilling brings out the best in the highland cheese, and the cranberry enhances the flavour. The speciality also goes very well with bread.

The obwarzanek is an integral part of Kraków’s culinary culture. It is a dry bread made from two thin rolls of dough. The dough is parboiled before baking, i.e. it is placed in warm water for a while - this process stops the yeast from doing its work, i.e. the dough from rising. Its diameter is between 12 and 17 cm, and it is sprinkled with poppy seeds, salt, sesame seeds or other toppings. The ‘obwarzanek Krakówski’ is one of the symbols of Kraków, with a protected geographical indication in the European Union. The Żywe Muzeum Obwarzanka w Krakówie at 4 Paderewskiego Street is where you can not only eat an obwarzanek but also prepare and bake it yourself. An obwarzanek is often mistaken for a bagel, which is a Jewish bread that has been baked in Kraków since the 17th century. It is a ring-shaped yeast roll with a firm core and soft crust. Bagels are sometimes sprinkled with poppy seeds, sesame seeds or dried onion flakes. Sweet varieties are also made, e.g. with the addition of sultanas and cinnamon. Interestingly, around 1900, Jewish immigrants from Poland moved bagels to Manhattan. 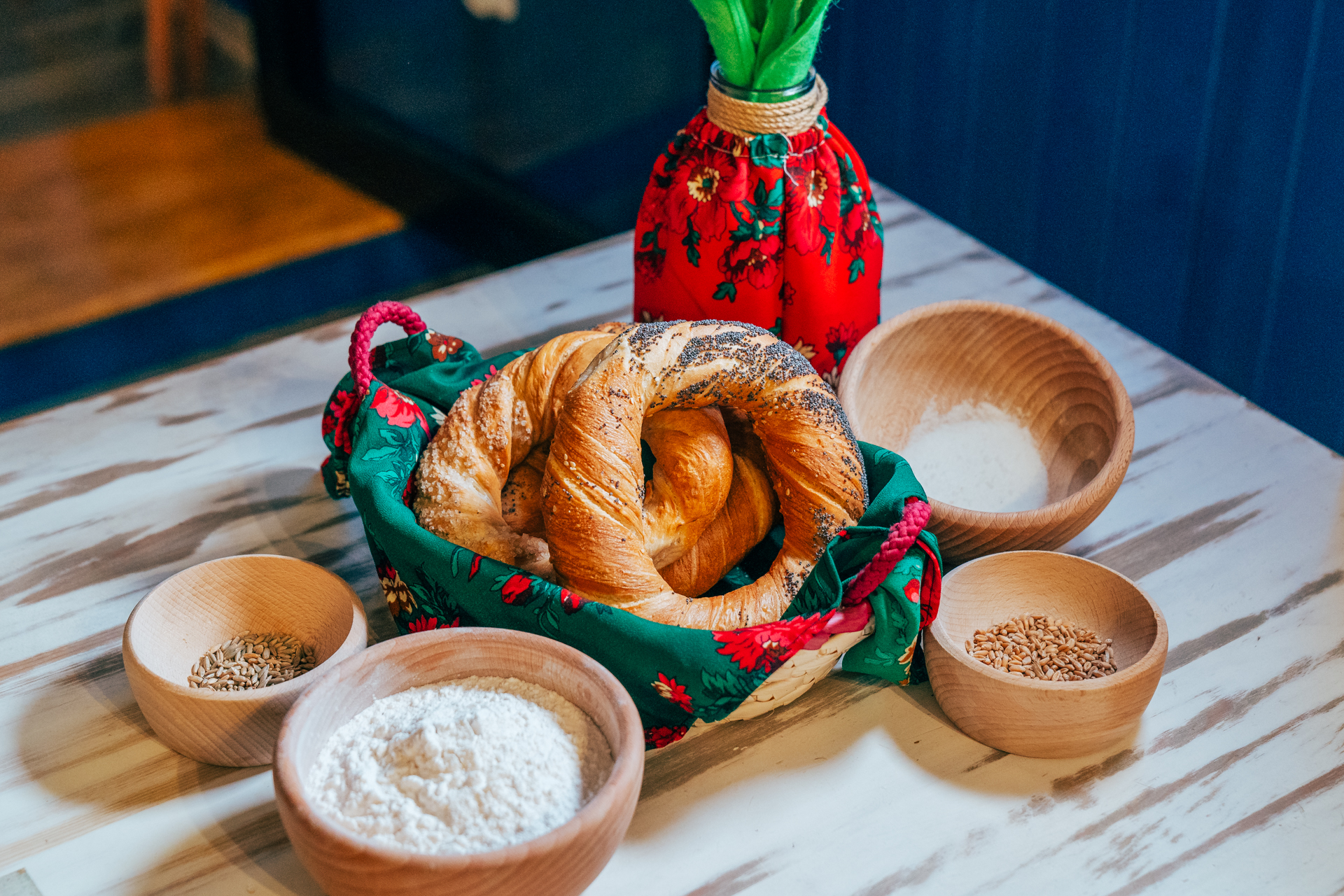 Here are some suggestions of Kraków’s squares and plazas that bring together food trucks filled with delicious dishes and snacks, surrounded by post-industrial buildings, monuments, art and culture.

There is probably no better way to get to know a city than to try street food. Street food is about creativity, fun and variety. When visiting Kraków, the capital of the Małopolska region, you can get to know the taste of traditional local dishes, such as the krakowska maczanka sandwich, zapiekanka, blue Nyska sausages, obwarzanek krakowski or grilled oscypek with cranberry. The heart of Małopolska is where Polish culture mixes with Austrian, Hungarian, Mediterranean, Turkish, Jewish, Asian and other cultures. The Jewish bagel or Turkish kumpir, for example, testify to Kraków’s ties with the Middle East. All this means that in street food, you can taste dishes characteristic of traditional Polish cuisine and those from all over the world. You are welcome to visit Małopolska.